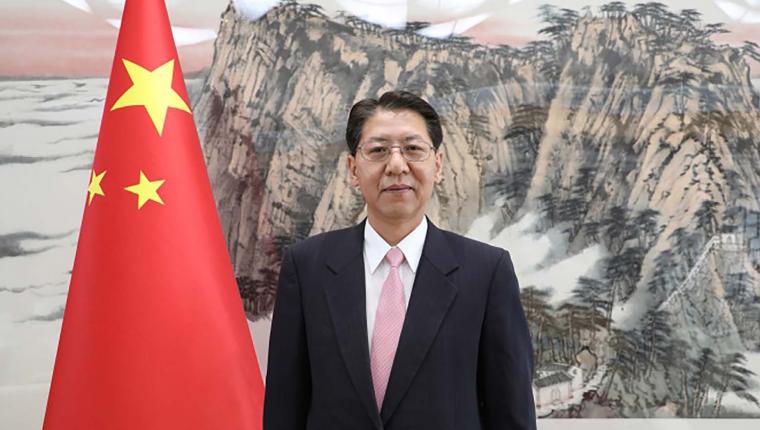 Download
BELT AND ROAD COOPERATION MARKS A NEW CHAPTER ON THE 50TH ANNIVERSARY OF DIPLOMATIC RELATIONS BETWEEN CHINA AND TURKEY.pdf

THE YEAR 2021 MARKS THE 50TH ANNIVERSARY of diplomatic relations between China and Turkey. Over this period, thanks to the joint efforts of the governments and people of the two countries, China-Turkey relations have overcome numerous international challenges and entered a mature and stable stage of development. Especially since establishing a strategic cooperative relationship in 2010, cooperation between the two countries in fields such as politics,  economy, people-to-people exchanges, culture, science and technology has developed rapidly.

Growing mutual political trust between China and Turkey has provided a solid guarantee for further deepening bilateral relations. The two countries’ leaders have always planned and grasped China-Turkey relations from a strategic and long-term perspective. The two countries firmly support each other in safeguarding their national sovereignty, independence and territorial integrity and in pursuing a development path in line with their own national conditions. In recent years, under the leadership of President Xi Jinping and President Recep Tayyip Erdogan, bilateral relations have been consistently improving, as marked by a consensus on mutual respect for each other’s core interests and major concerns. For the 50th anniversary of diplomatic relations, the two leaders had a telephone call and conveyed congratulatory messages to each other, positively evaluated the achievements of bilateral cooperation in various fields, and determined the direction of development of bilateral relations for the new period.

The fruitful results of pragmatic cooperation between China and Turkey have provided significant benefits for the people of both countries. China-Turkey  cooperation in areas of trade, investment and finance is progressing steadily. China has become Turkey’s second-largest trading partner as it has actively taken a series of measures to increase imports from Turkey. High-quality Turkish agricultural products such as cherries, pistachios, dairy, aquatic and poultry have been welcomed by Chinese consumers. Between January and September 2021, bilateral trade volume increased by 44.1% to reach $24.49 billion, and China’s non-financial direct investment in Turkey reached $160 million with an annual increase of 647.9% compared to the previous year. Financial cooperation between China and Turkey has deepened further, and the scale of local currency swaps has reached 35 billion yuan.

The ancient Silk Road represents a bridge for communication and exchange between the two civilizations for thousands of years.

In just a few years of entering the Turkish market, Bank of China and Industrial and Commercial Bank of China have provided tens of billions of dollars of financing support for joint projects and local projects between the two countries. China and Turkey are actively exploring new ideas and measures to optimize their trade structure and enhance their economic and trade cooperation in order to seize the opportunities of the development of the digital economy and fully release the potential of cooperation between the two countries in the areas of trade in services, digital economy and e-commerce.

People-to-people and cultural exchanges between China and Turkey, which are becoming increasingly close, have prepared a solid public base for friendship. China and Turkey have a long history of friendship and the ancient Silk Road represents a bridge for communication and exchange between the two civilizations for thousands years. Since establishing diplomatic relations, people-to-people and cultural exchanges between China and Turkey continue to expand. The two countries have concluded 26 pairs of sister provinces or sister cities, and thanks to activities such as the Year of Culture and the Year of Tourism, people from each country know each other better than ever. The Yunus Emre Turkish Cultural Center was officially opened in Beijing, while China opened 4 Confucius Institutes in Turkey, becoming a window for Turkish people to learn Chinese and Chinese culture. China and Turkey also have more than ten universities offering courses in the other’s language.

In the face of the Covid-19 outbreak, China and Turkey have stood by other and overcome existing difficulties together and have carried out active and fruitful close cooperation in providing anti-epidemic materials and sharing experience in fighting the pandemic. China’s Sinovac has cumulatively provided a large number of vaccines to Turkey at its most urgent moment, accumulating more than 70 million doses, which has greatly helped Turkey fight the pandemic and created a new highlight for China-Turkey relations.

“Iron Silk Road”, which spans across the Asian continent from one end to the other, has re-connected China and Turkey and ensured the rapid circulation of goods between the two.

Cooperation between the two countries for the joint construction of the Belt and Road has yielded productive results. For example, the China-Europe Freight Train “Chang’an” connecting China’s Xi’an to Turkey’s Istanbul, opened regular traffic in both directions. This “Iron Silk Road”, which spans across the Asian continent from one end to the other, has re-connected China and Turkey and ensured the rapid circulation of goods between the two. Turkey’s Kumport Port plays an important role in the Belt and Road. After a consortium of Chinese companies bought 65% of the port, the original Turkish team remained completely in place, a local management model continued, and the container capacity and revenues of the port gradually increased.

Industrial development of the two countries in such areas as infrastructure and renewable energy is constantly being harmonized. Chinese companies are implementing mega-projects such as the Ankara-Istanbul High Speed Railway Phase II Project, the Ankara 500MW Photovoltaic Industrial Park and the Tuz Gölü Underground Natural Gas Storage Project. Construction of the Hunutlu Thermal Power Plant, China’s largest Belt and Road project in Turkey, is progressing smoothly. All of these projects have created a large number of local jobs. Huawei has established the second largest R&D center abroad in Turkey, while smartphone brands such as Xiaomi, Vivo, Oppo, and white goods giant Haier have also invested in factories in the country, contributing to Turkey’s technological development and innovation.

The year 2021 marks the 100th anniversary of the founding of the Communist Party of China (CPC). Xi Jinping, General Secretary of the CPC Central Committee, proudly declared at the Party’s centenary ceremony that we have realized the first centenary goal and are marching in confident strides toward the second centenary goal, which aims to realize the vision of a great modern socialist country in all respects. The Turkish people have also put forward “Vision 2023-2053” and are making efforts to realize the “2023 Goals”.

dreams, the two countries will face more opportunities and broader space for development. Standing at a historical starting point, we hope that China and Turkey will understand and respect each other’s core interests and major concerns, strengthen mutual political trust and strategic cooperation, manage contradictions and differences appropriately, protect the political foundation of bilateral relations together, extensively explore intersection points of interest, achieve new fruits in pragmatic cooperation in various fields by accelerating the high-quality joint construction of the Belt and Road, and make intense efforts for developing China-Turkey strategic cooperative relationship and building a community with a shared future for mankind.

*Spots have been added by BRIQ.

Special Issue Call for Papers: The Eastern Mediterranean in Transition: Caught between the Atlantic Camp and Eurasia
Sat, 10/15/2022 - 00:00
END_OF_DOCUMENT_TOKEN_TO_BE_REPLACED