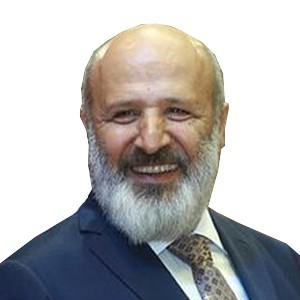 He completed his primary and secondary education in Siirt. He graduated from Istanbul University, Business Faculty in 1976. He worked as a journalist between 1976 and 1978. He served as responsible for southeast and east of Workers’ and Peasants’ Party of Turkey and also Diyarbakır Province Head of the Party. Later he took up business. He founded Es Pharmaceutical Warehouse in 1978 and Esko Perfumery which provides serves to pharmacy in the field of cosmetics and perfumery in 1989. He also founded Hedef Pharmaceutical Warehouse in 1993. He serves as the chairman of Hedef Alliance Holding that was founded in 2001 after Hedef Pharmaceutical Warehouse had gotten into partnership with Alliance Boots. Mr. Sancak sold his holding shares and then he established a company by name Es Financial Investment Consulting. With this company, he bought BMC, manufacturer of truck, bus and military vehicle. Ethem Sancak was selected “Business Manager of the Year” in 2001 and “Entrepreneur of the Year” in 2005. He was granted an award of “National Sovereignty Outstanding Service and Honor Award” by Turkish Grand National Assembly. He served the chairman of Pharmaceutical Wholesalers Association of Turkey between 2004 and 2010 and member of the board of directors of TUSIAD and president of Social Affairs Comission between 2007 and 2008. He currently is the vice chairman of Istanbul Museum of Modern Art, member of the board of directors of Istanbul Foundation for Culture and Art, member of the board of directors of TEGV (Educational Volunteers of Turkey), member of executive council of ERG (Education Reform Initiative), founding member of TUSEDAD (All Milk, Meat and Breeding Cattle Breeders Association), member of the board of trustees of TESEV (Turkish Economic and Social Studies Foundation), member of high advisory board of Darüşşafaka Society and member of Arbitration Board of Democracy of Justice and Development Party. Besides, he is also member of advisory board of Okan University.

13/09/2022
The New World is to be established by achieving wealth and peace, which will derive from the universal values created by the Silk Road

Special Issue Call for Papers: The Crisis of the Hegemonic Financial System and the Rising Search for Financial Cooperation in the Developing World
END_OF_DOCUMENT_TOKEN_TO_BE_REPLACED