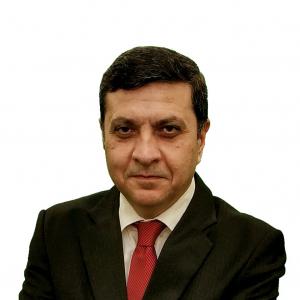 Fikret Akfırat graduated from Sociology Department Hacettepe University, Ankara Turkey. He had a master’s degree in journalism at Ankara University. His master thesis was on “Transformations in Turkish tv broadcasting after 1990: The cases of CNN Turk and Fox TV”. He has been working as a journalist since 1995. Between 1995 and 2012, he worked as diplomacy correspondent for Aydınlık newspaper and Ulusal Kanal, then as Foreign News Editor, News Manager and Ankara Representative. He was the Chief of Ankara (capital city of Turkey) Bureau of Ulusal Kanal Television(National Channel) and Aydınlık Newspaper for 12 years. He is the Aydınlık Newspaper’s Chief of Aegean Bureau in Izmir since 2013. During his time as a journalist, his main focus was diplomacy and foreign news. His published works include numerous reports, interviews and articles on Turkish-American relations, the Kurdish issue, Iraq, Syria, Iran, US-Russian rivalry in Central Asia. He has also prepared and presented TV programs on strategy, domestic and foreign politics. He traveled more than once to China, Russia, Iraq, Northern Iraq, Iran and Syria. He attended several meetings about Belt and Road Initiative together with the experts and academicians form Chinese Social Sceince Academy and the universities at Beijing, Xian and Shanghai. Besides he had the chance of visiting Xinjiang Uyghur Autonomus Region, Urumchi, Khorgoz, Ili-Gulca. When ISIL captured Raqqa, he was in Damascus for an interview with the Syrian President. He made an interview with Syrian President Bashar al-Assad in April 2013 at the Presidential Palace in Damascus which led to major repercussions in Turkey and internationally. He has written 2 books: The Puppet State, How the United States Founded Kurdistan (First Edition-2004, Second Edition-2007) and Erdogan's Syrian Expedition in 2015.

Special Issue Call for Papers: The Crisis of the Hegemonic Financial System and the Rising Search for Financial Cooperation in the Developing World
END_OF_DOCUMENT_TOKEN_TO_BE_REPLACED