Collaboration for A New Civilization That Will Transcend Time and Space* 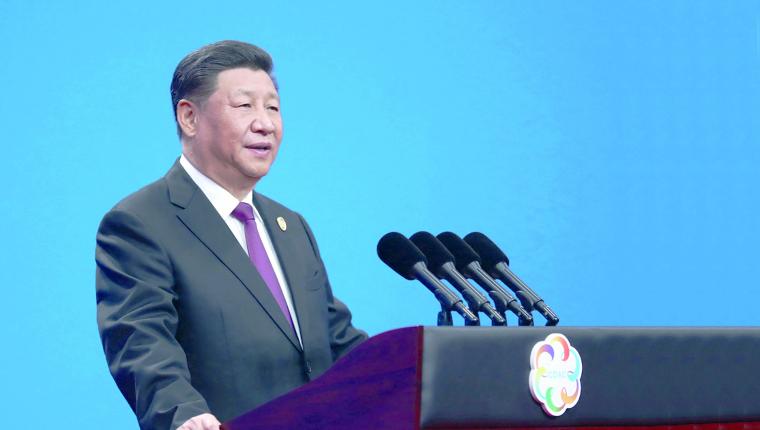 Download
Collaboration for A New Civilization That Will Transcend Time and Space.pdf

To meet our common challenges and create a better future for all, we look to culture and civilization to play their role, which is as important as the role played by economy, science and technology. The Conference on Dialogue of Asian Civilizations has convened to create a new platform for civilizations in Asia and beyond to engage in dialogue and exchanges on an equal footing to facilitate mutual learning.

Editor’s Note: The Conference on Dialogue of Asian Civilizations began in Beijing on May 15, 2019. Chinese President Xi Jinping addressed the opening ceremony under the theme of Deepening Exchanges and Mutual Learning Among Civilizations for an Asian Community With a Shared Future, which he used to address the special place that Asian civilizations have in the annals of world civilizations. The following is an edited excerpt of his speech:**

Today, the world moves ever closer towards greater multi-polarity, economic globalization and cultural diversity, becoming increasingly information orientated in the process. This progress suggests promising prospects for the future. However, in the face of mounting instabilities and uncertainties currently faced by many people around the world, countries need to unite and respond to these adversities.

To meet our common challenges and create a better future for all, we look to culture and civilization to play their role, which is as important as the role played by economy, science and technology. The Conference on Dialogue of Asian Civilizations has convened to create a new platform for civilizations in Asia and beyond to engage in dialogue and exchanges on an equal footing to facilitate mutual learning.

Asia is one of the earliest human settlements in the world, which makes it an important cradle of human history. This vast and beautiful continent covers a third of the earth’s land mass and has two-thirds of the world's population. It has more than 1,000 ethnic groups living in 47 countries.

As we review our past and look beyond Asia, we should have greater confidence in our civilizations. We may build on the rich heritage of our forefathers, stay engaged with other civilizations and increase mutual learning. By doing so, we will add new glory to Asian civilizations.

We Asian countries are closely connected and share a natural bond of affinity because of our shared experience of the past and our shared anticipation of what the future holds for us. Going forward, we need to see where the world is going, ride on the trend of the times and turn our people’s longing for a better life into reality.

We Asian people hope to see peace and stability across Asia. Upholding peace is the responsibility of every country. When strife breaks out in the forms of conflict or war, economic growth, social stability and mutual exchanges will break down with it. We the people of Asian countries wish to live and work in content and security free from fear. We hope that all countries will respect and trust each other, live in harmony, and interact with each other in a way that transcends national boundaries, time and space, as well as the difference between civilizations. We should work together and jointly safeguard peace, something that is even more precious than gold.

We Asian people hope to see common prosperity in Asia. Economic growth sustains a civilization, and prosperity underpins the progress of a nation. However, in some parts of Asia, people, women and children in particular, still suffer from the plight of poverty, hunger and disease. This must change. We Asian people long for decent lives free of poverty. We hope that countries will collaborate in promoting economic globalization and make it more open, balanced and beneficial to anyone regardless of their background. Doing so will enable us to eradicate poverty and backwardness that still plague people in some countries. It will make life carefree for our children and bring happiness to all families.

We Asian people hope to see an open and better-connected Asia. Asia’s rapid development over the past decades shows that it is important to open one’s door to the outside world and ride on the trend of global economic development.

If countries choose to close their doors and hide behind them, human civilizations would be cut off from each other and lose all vitality. We Asian people hope that all countries will reject self-exclusion, embrace integration, uphold openness and promote policy, infrastructure, trade, financial and people-to-people connectivity. This way, we can jointly foster a community with a shared future for both us Asians and all humanity.

Exchanges and Mutual Learning of Civilizations

Diversity spurs interaction among civilizations, which in turn promotes mutual learning and their further development. We need to promote exchanges and mutual learning among countries, nations and cultures around the world, and strengthen popular support for jointly building a community with a shared future not only for Asians but for all people.

To realize this goal, we need to respect each other and treat one another as equals. All civilizations are rooted in their unique cultural environment. Each embodies the wisdom and vision of a country or nation, and each is valuable for being uniquely its own. Civilizations vary from each other in this way, just as individuals differ from each other in skin color and language, but this does not imply a cultural superiority. The thought that one’s own race and civilization are superior and the inclination to remold or replace other civilizations are just stupid. To act out a superiority complex would only bring catastrophic consequences. If human civilizations are reduced to only one single color or one single model, the world would become a stereotype and too dull a place to live in. What we need is to respect each other as equals and say no to hubris and prejudice. We need to deepen understanding of the difference between one’s own civilization and others’, and work to promote interaction, dialogue and harmony among civilizations.

Each civilization is the crystallization of human creation, and each is beautiful in its own way. Together we can make the garden of world civilizations colorful and vibrant.

Furthermore, we need to embrace the beauty of each civilization and of diversity in the global community. Each civilization is the crystallization of human creation, and each is beautiful in its own way. The aspiration for all that is beautiful is a common pursuit of humanity that nothing can hold back. Civilizations don’t have to clash with one another; we need eyes that can see beauty in all nations in the world. We should keep our own civilizations dynamic and create conditions for other civilizations to flourish. Together we can make the garden of world civilizations colorful and vibrant.

Lastly, we need to advance with the times and explore new ground in development. For a civilization to endure, efforts must be made to keep it alive and build on its heritage from one generation to the next.

More importantly, a civilization needs to adapt itself to the changing times and break new ground.  World history teaches us that taking advantage of the opportunities available and advancing with the times is fundamental to development. We need to come up with new ideas to add impetus and inspiration to the development of our civilizations. With these efforts, we will deliver achievements for our civilizations to transcend time and space and have a lasting appeal.

Being an inseparable part of the Asian community, Chinese civilization has, since its early days, evolved and grown by drawing on its past achievements, exploring new ground and adapting to changes. It represents the profound pursuit of the Chinese nation and provides a rich source of strength for its lasting development. Chinese inventions such as paper-making, gunpowder, printing and the compass as well as China’s astronomical knowledge, calendar system, philosophy and the people-centered doctrine have all had a global impact and propelled the development of human civilizations.

Chinese civilization, as an inclusive and integrated whole, has become what it is today through constant interactions with other civilizations. It has been enriched by the introduction of Buddhism and the confluence of Islam and Confucianism, and by the introduction of Western learning, the launch of the New Culture Movement and the introduction of Marxism and socialism in modern times. All-round opening up of the country, starting with the reform and opening-up program, has added to its vitality today. Amity and good neighborliness is the principle guiding our interactions with other countries; and to deliver prosperity and security to the people is the overarching goal, to keep pace with the times through reform and innovation the abiding commitment, and to achieve harmony between man and nature the underlying philosophy.

China today is more than the country itself; it is very much a part of Asia and the world. In the time to come, China will open its arms wider to embrace the world and contribute the dynamic achievements of Chinese civilization to a better future for the whole world.

* The text is titled by BRIQ.

Special Issue Call for Papers: The Eastern Mediterranean in Transition: Caught between the Atlantic Camp and Eurasia
Sat, 10/15/2022 - 00:00
END_OF_DOCUMENT_TOKEN_TO_BE_REPLACED